The USDA Farm Service Agency reports more than 18,900 operations, or 75% of all dairy farms with established production history, are enrolled in the Dairy Margin Coverage program for the 2021 calendar year. This is a 50% increase from the just over 50% of all dairy operations that were enrolled for 2020. Part of this increase is due to the extreme price volatility caused by pandemic-induced market fluctuations that pushed many to enroll in an attempt to manage future risk exposure. Recent news of a seventh consecutive month of payouts has many producers grateful for their enrollment decision.

June was the seventh consecutive month with calculated margins below the upper $9.50/cwt trigger cutoff. At $6.24/cwt, the June margin triggered payments under the Tier I level ranging from $0.26/cwt at the $6.50 selection rate and up to $3.26/cwt for those at the $9.50 selection rate. The $6.24 also triggered Tier II level payments ranging from $0.26/cwt at the $6.50 selection rate up to $1.76/cwt for those with the $8.00 selection rate. FSA expects to pay out over $540 million in DMC payments this year, with an average of $28,696 per operation. One of the primary culprits for reduced overall margins is increased feed costs. The factored average feed cost used to calculate DMC margins reached $12.31 in May and $12.16 in June, the highest levels since the program began in 2019. Figure 1 displays factored average feed cost (dark blue) used to calculate the DMC margin (red) for the last two years. Subtracting the factored average feed cost from the USDA reported all milk price gives you the DMC milk margin responsible for triggering payments for producers with relevant protection levels. 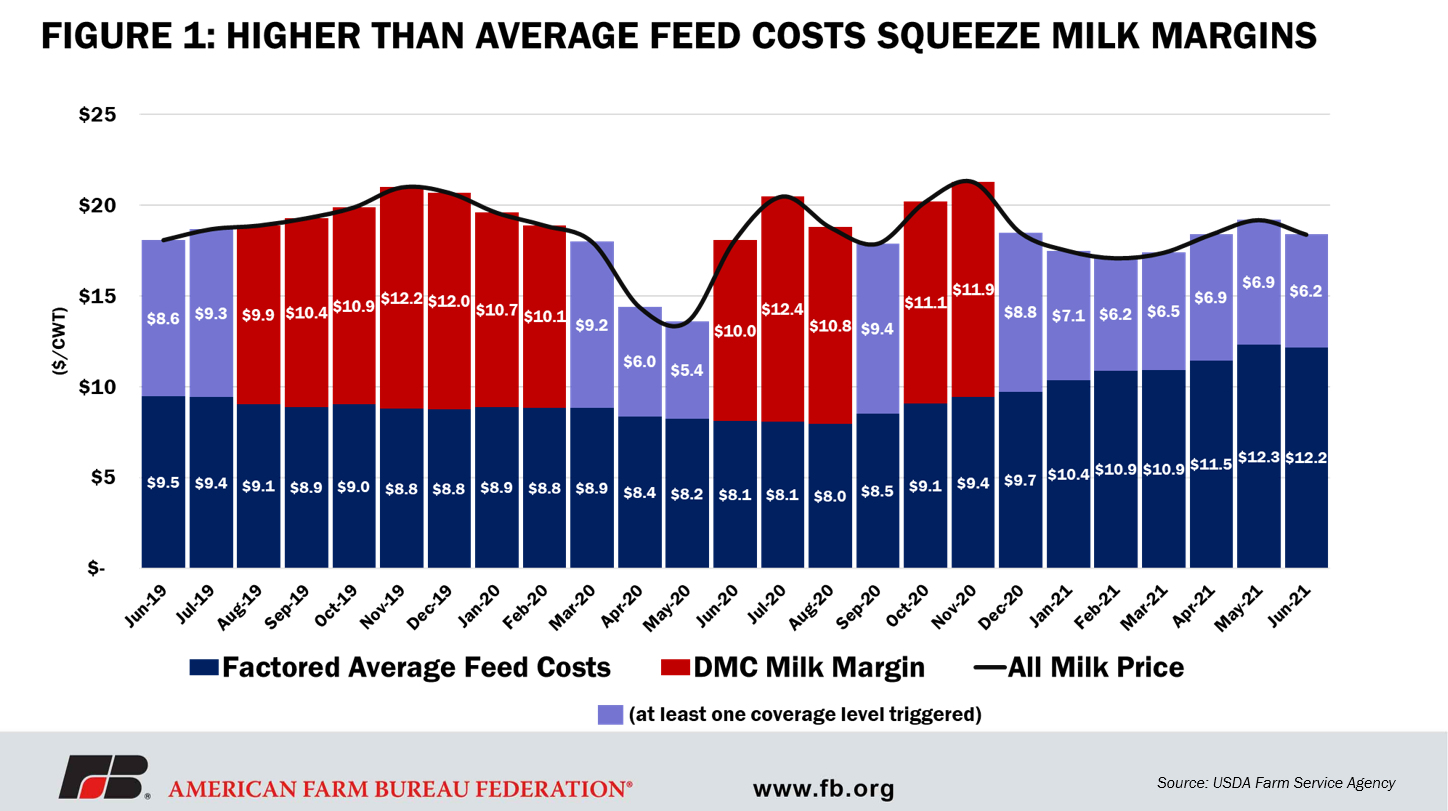 Most of the upward trend in feed costs can be linked to corn and soybean meal prices that have remained higher than average since last summer. Backed by strong exports and lower supply expectations globally, higher feedstuff prices further pressure the solvency of livestock and dairy farms. Though not as severe of an increase, the blended alfalfa price has ticked upward recently. This is at least partially linked to severe drought conditions across Western states, which account for 57% of the nation’s hay production by value.

Dairy farmers have also outpaced milk production expectations across the board. Milk production per cow was up 0.2% in the first quarter and 2.2% in the second quarter from 2020 levels thanks to continued advancements in dairy herd management. USDA’s forecast in February for a 1% increase in national milk production in the first quarter and a 3.59% increase for the second quarter was surpassed by actual increases of 1.07% and 3.69%, respectively. Record supply can be linked to a record national dairy herd over 9.5 million strong as of July 1. In addition, new processing plants in the upper Midwest increased demand for milk, prompting several large-scale expansions in the region, helping drive the increase. Heavy supply conditions negatively pressure milk prices and margins, especially in regions with lower regional consumption. 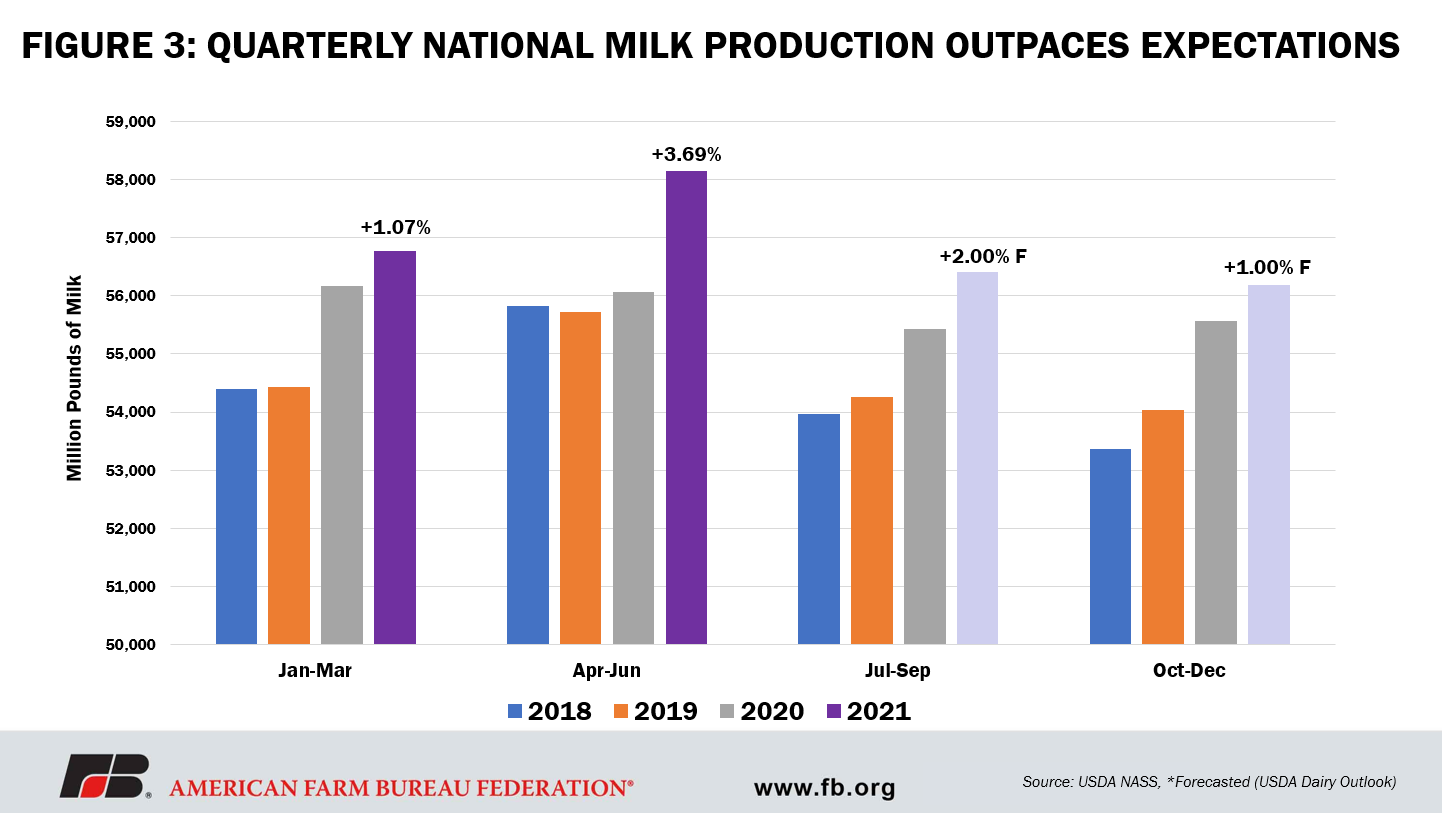 Record butterfat levels, reaching over 4.05% for 2021 (up from 3.95% in 2020), have contributed to historic overhanging butter stocks. In May, ending commercial stocks outpaced domestic commercial disappearance by 234 million pounds. Further additions to stored butter product threaten Class IV prices with related futures prices on a downward trend. 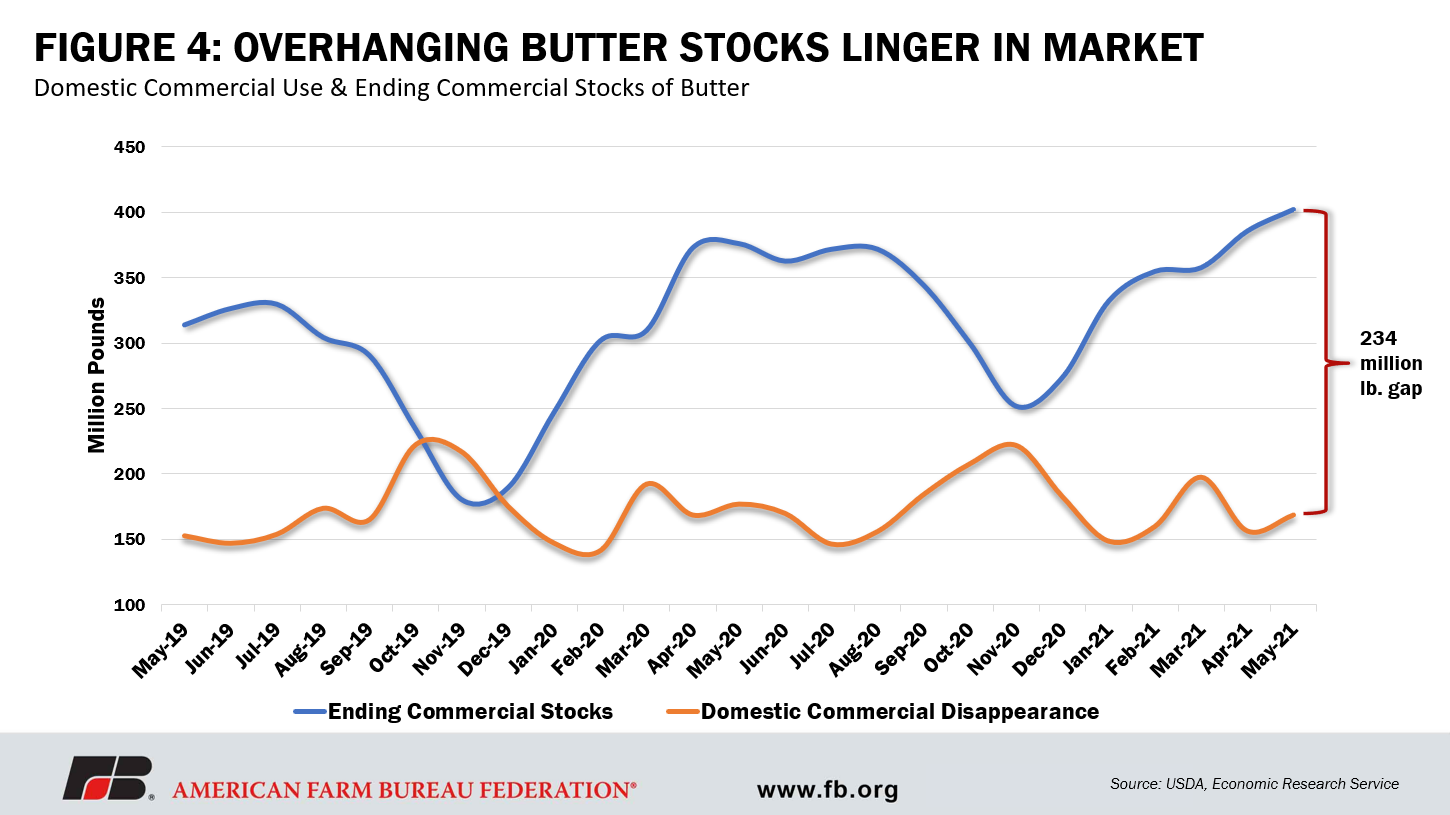 Under the 2018 farm bill, production history for each operation is established using the highest of the operation’s marketings from the 2011, 2012 or 2013 calendar years. Under this framework, production history for an operation would not change even if farm characteristics such as the size of the herd were altered. Last December, under the Consolidated Appropriations Act of 2020, supplemental DMC based on 75% of the difference between 2019 marketings and the old base calculation (2011-2013 milk marketings) number was passed into law. The new policy allows operations to opt for higher milk production coverage if changes to herd size were made since the 2011-2013 basis years. Though currently the law of the land, USDA has yet to release further guidance or details on when or how the program change would be implemented, leaving the 2018 farm bill framework currently in effect.

Additionally, on August 19, USDA announced improvements to existing dairy safety nets including an update to the underlying factored average feed cost formula for DMC. Though details are limited, USDA’s press release indicates the change will better reflect costs of high-quality alfalfa, moving forward, while providing an additional $100 million in assistance retroactively for 2020 and 2021.

Risk management programs like DMC provide a revenue buffer for producers feeling the tight squeeze of shrunken operational margins. Persistently high feed prices, strong domestic supply and large product stocks will continue to pressure these margins from both the cost of production and market price angle. Short-run market conditions have triggered DMC payments for producers at or above the $6.50 margin rates for Tier I and II protections. Until feed costs recede or the all-milk price increases to a margin higher than $9.50, some producers will continue to receive program payouts. It is important to note, there are no restrictions on combining crop insurance and Title I programs meaning dairy producers can sign up for both DMC and Dairy Revenue Protection or Livestock Gross Margin - Dairy Cattle. Choosing the most appropriate protection options requires careful consideration of a producer’s operation, such as affordability and production characteristics. 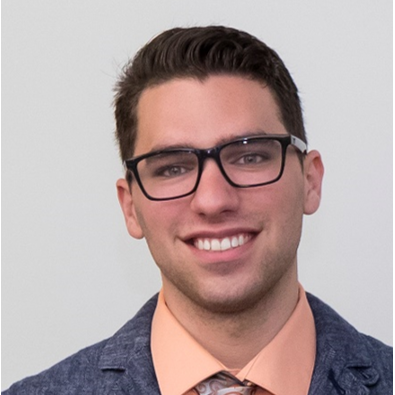 As we celebrate America’s independence, let’s also take a moment to celebrate the incredible farmers and ranchers who feed America. Farmers are vital to maintaining our freedom and our food security. AFBIS wishes you all a safe and happy Independence Day. https://t.co/UheCNuMvcH https://t.co/w17aP1awzD 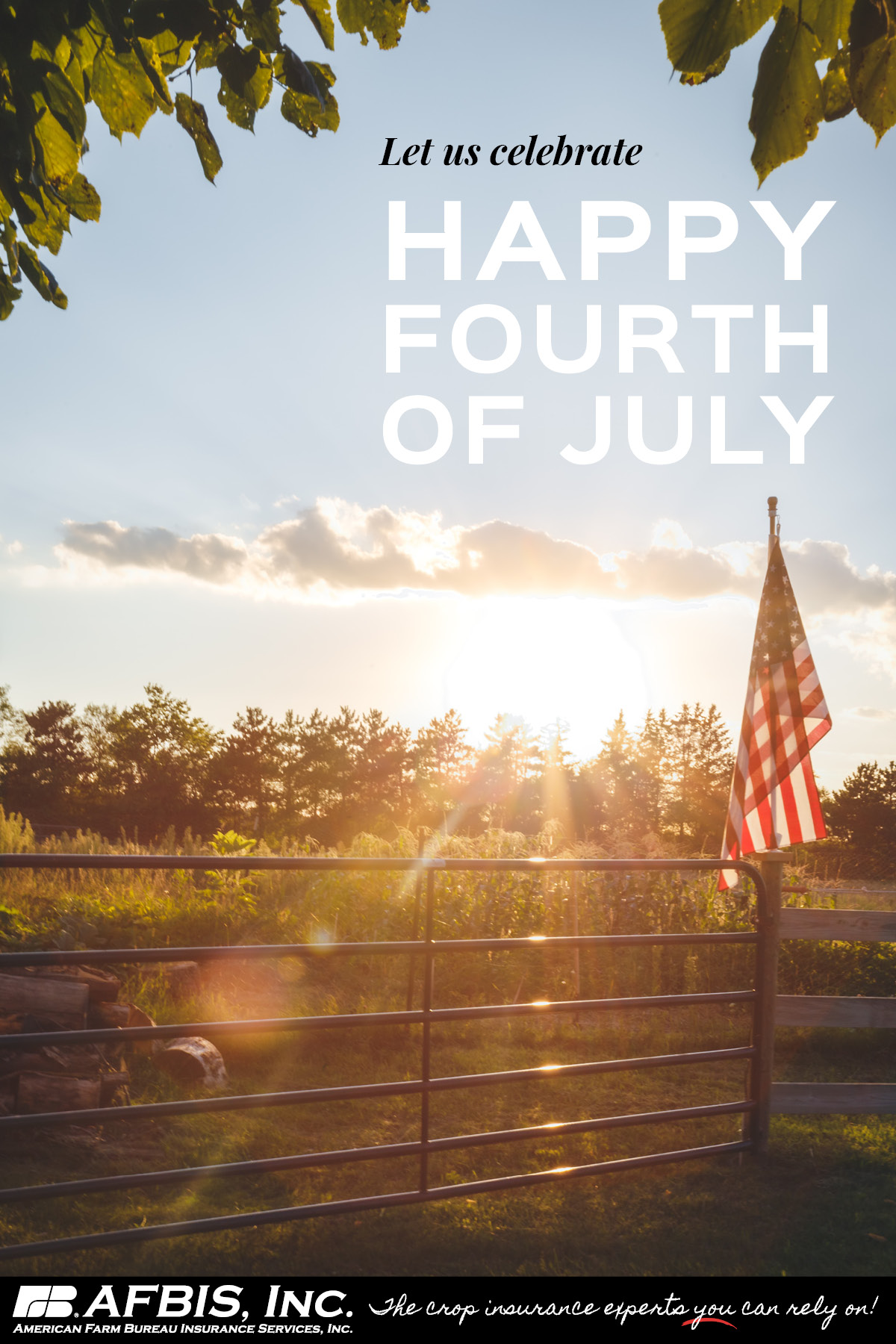 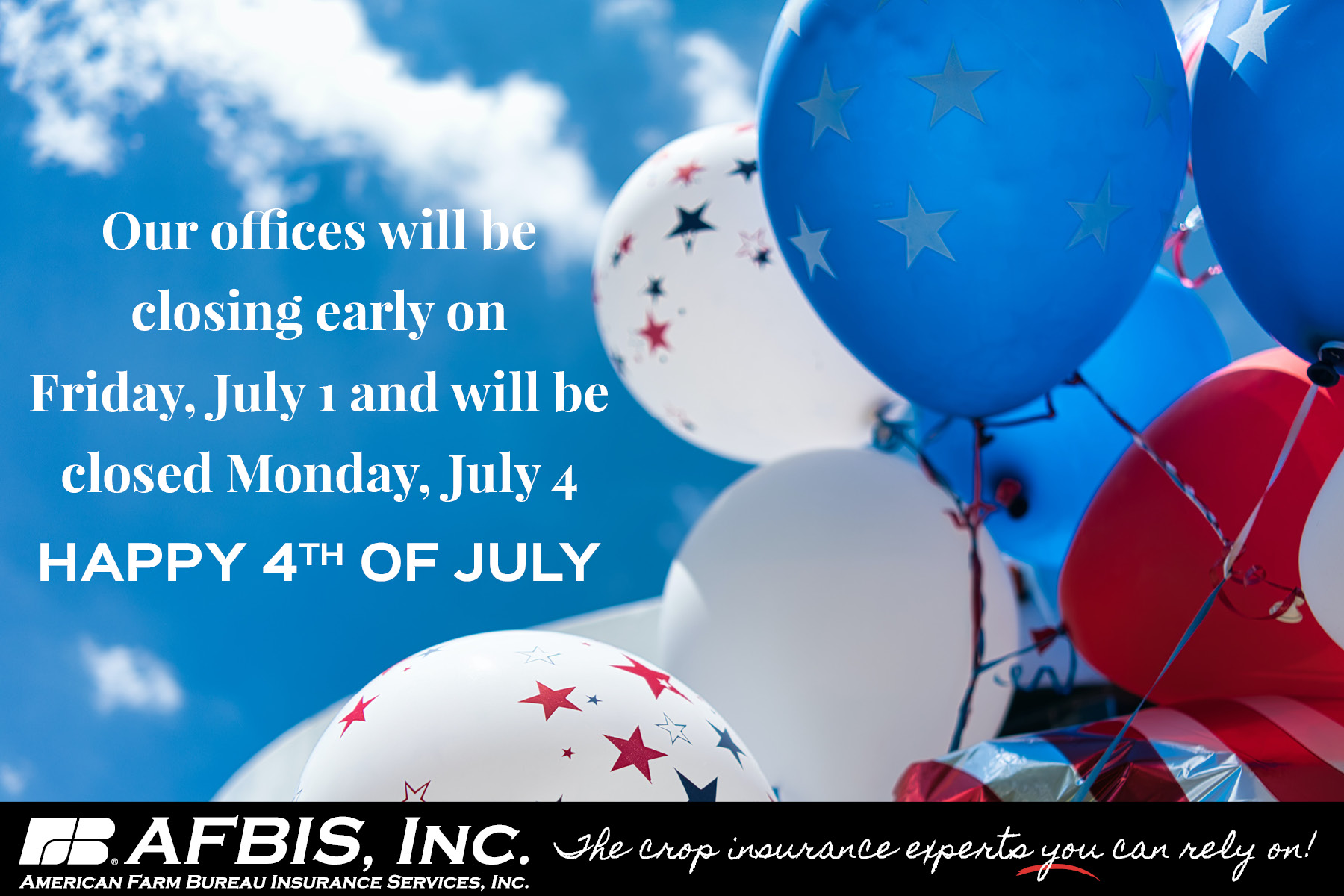 Tomorrow is the 1st day of the 2023 Crop Year! Tomorrow is also the two week mark until 7/15, which Acreage Reports must be signed & submitted to your crop agent. Check out our Acreage Reporting Checklist to ensure acreage is reported timely & accurately. https://t.co/m55t5xqYsp https://t.co/yBNdL1VXSl 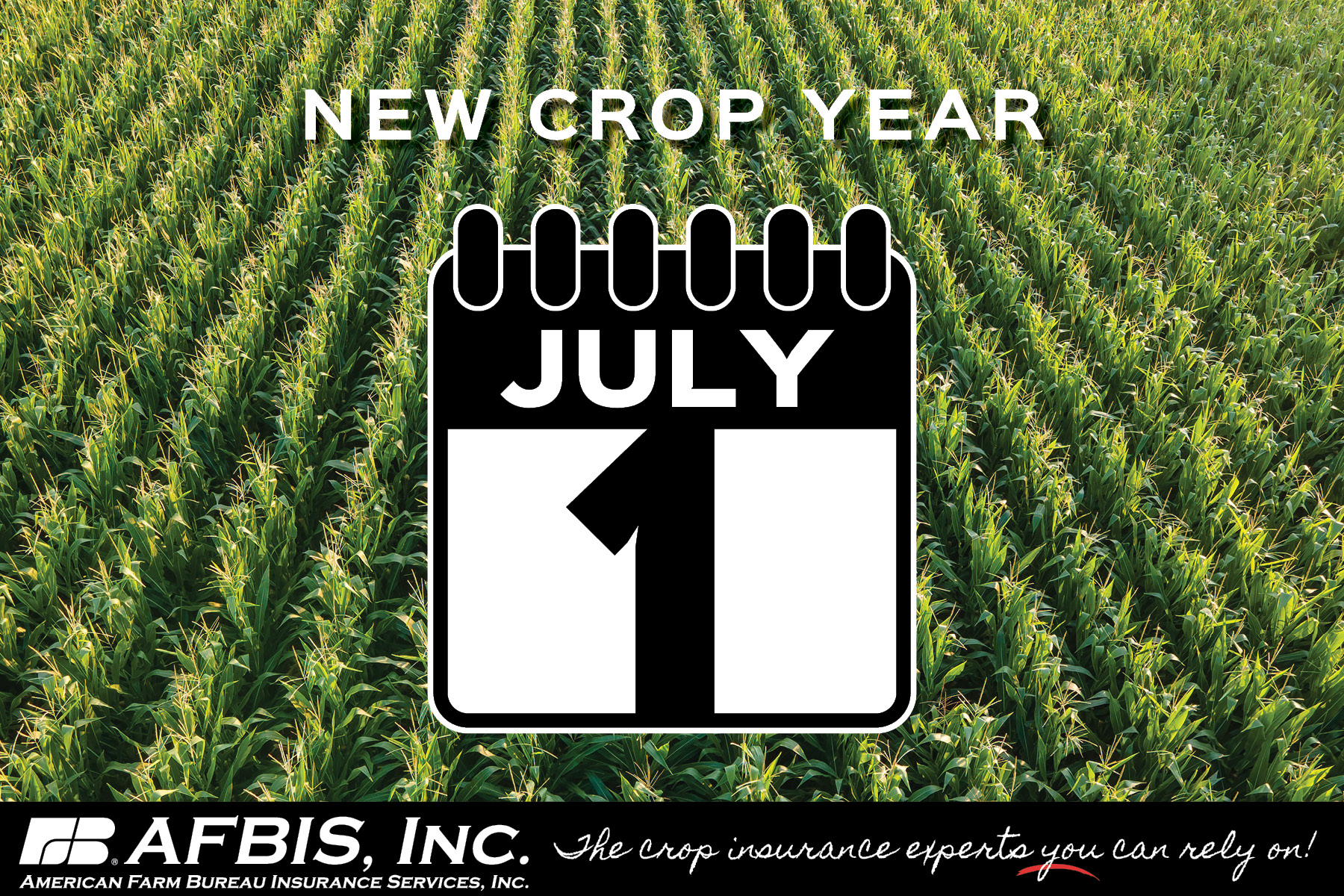 We would like to congratulate Todd Smith for his 15 years of service this month! Todd is a Systems Administrator in the AFBIS IS dept. His extensive knowledge & kind personality have made him a great asset to all the employees. We are truly happy to have you as a team member. https://t.co/zKdXh4dir8 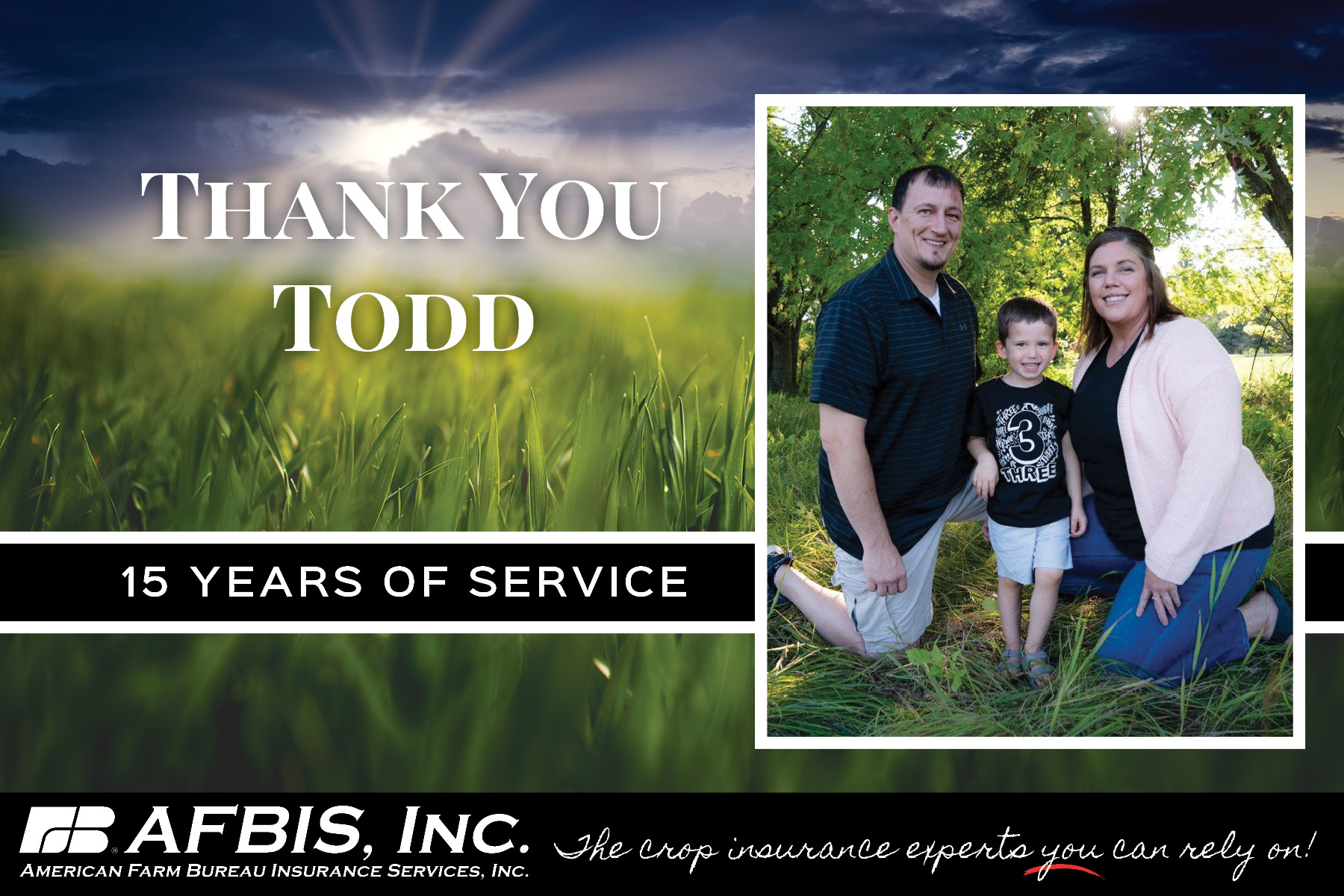 An Arkansas farmer shares how Crop Insurance has been there when needed but hopes he never has to utilize it and would rather have a good harvest! https://t.co/bIQ4h3BOc7 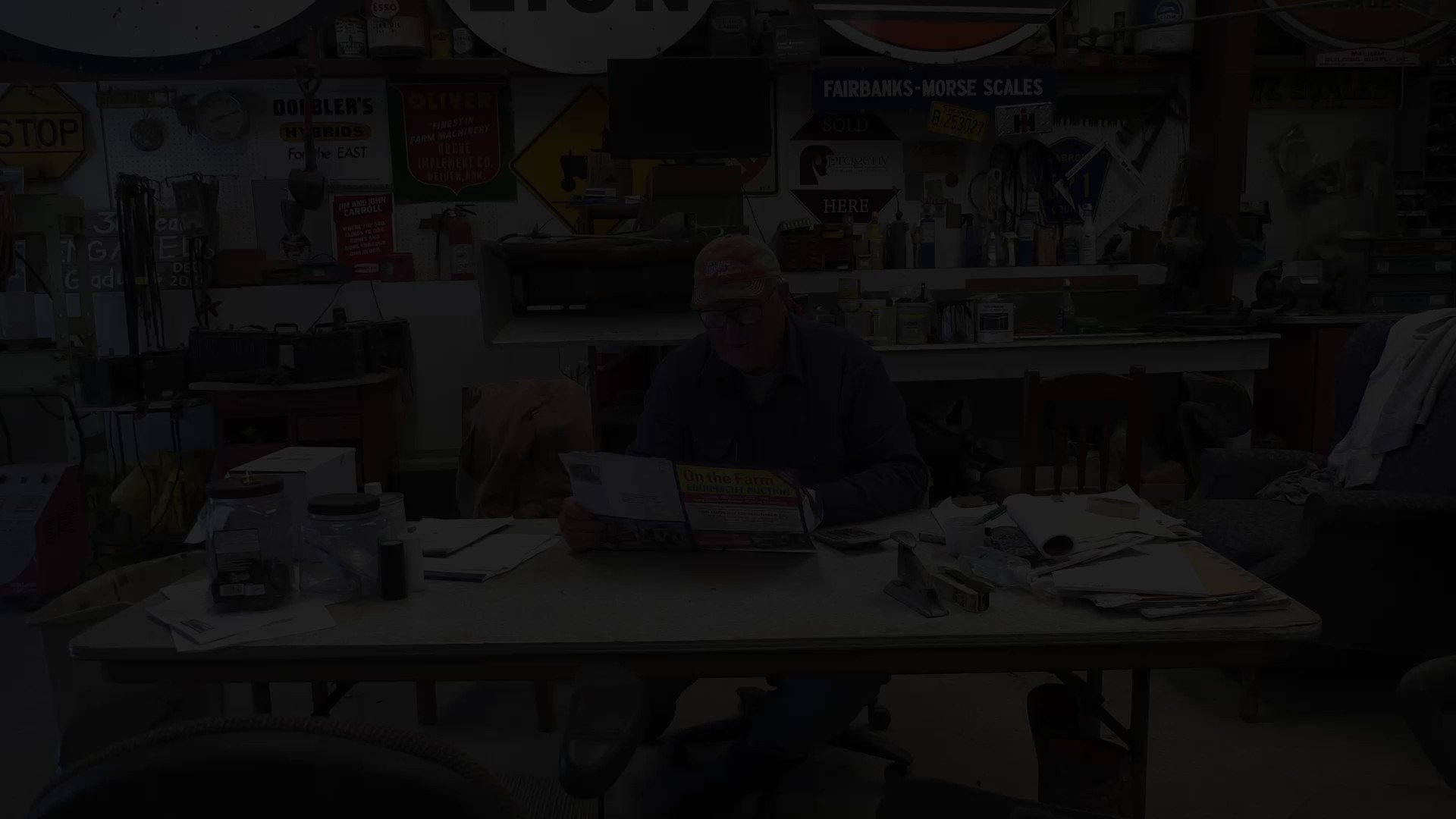