The much-anticipated June 30 Acreage Report has the potential to shift commodities positively or negatively given the current conditions of grain markets. Looking back at 2019 and 2020, those weren’t easy crop years. In 2019, heavy rains and excessive moisture led to a record 20 million-plus acres of prevent plant insurance claims. In 2020, uncertainty amidst COVID-19 precautions created widespread price volatility across the food supply chain. As impacts from those two years play out, commodity prices have rebounded, fueled by global demand that has pushed ending stocks lower for both corn and soybeans.

Speculation about shifting production from soybeans to corn and vice versa, corn to soybeans, has fueled market trade since the March Prospective Plantings report. In this article, we analyze the impact of both shifting scenarios. Both scenarios imply that farmers will maintain the current estimate of 178.7 million acres of corn and soybeans combined. The February Agriculture Outlook Forum estimated farmers would plant a combined 182 million acres of corn and soybeans.

Given the June World Agricultural Supply and Demand Estimates for the 2021/22 marketing year, the corn price is projected to be $5.70 per bushel, up 31% from the 2020/21 marketing year corn price of $4.35 per bushel. The incentive to earn an extra $1.35 per bushel in this year’s market could push farmers to plant more corn. If farmers were to plant 3% more corn acres, it would increase corn planted acres from 91.1 million acres to 93.8 million acres. Early in this year’s growing season, USDA estimated that farmers will harvest 91% of corn acres. In this scenario, 86 million acres of corn would be harvested. At 179.5 bushels per acre, the current USDA yield estimate for the year, production would be on track to reach close to 15.5 billion bushels of corn, the most on record since 15.1 billion bushels were produced in 2016, and up from current estimates of just under 15 billion bushels. At current demand projections of 5.7 billion bushels going to feed and residual, 5.2 billion bushels to ethanol, another 1.4 billion bushels to food, seed and industrial use and 2.45 billion bushels of corn exports, this increase in corn production would push ending stocks up to 1.8 billion bushels, 33% higher than current estimates of 1.3 billion bushels. The stocks-to-use ratio would move from 9.2%, which is USDA’s current estimate, to 12.2% in this scenario, potentially relieving any upward pressure currently placed on corn prices. When the corn stocks-to-use ratio was last 12.2%, in 2014, corn prices were $3.70 per bushel.

Figure 1 displays corn stocks-to-use ratios with prices from the latest WASDE comparing the scenarios of an increase or decrease to corn planted acres.

The current marketing year estimate for 2021/22 soybean prices is $13.85 per bushel, up 23% from $11.25 per bushel in the current 2020/21 marketing year. This implies an incentive of $2.60 per bushel increase to plant soybeans. Keep in mind, soybean yields tend to be less than a third of the size of corn yields. If farmers were to plant 3% more soybean acres, it would increase soybean planted acres from 87.6 million acres to 90.2 million acres, which is about where USDA estimated soybean planted acres to be in February. With a harvest rate of 99% of planted acres, this scenario would imply farmers harvest 89 million acres of soybeans. Current soybean yield estimates of 50.8 bushels per acre would push production estimates to 4.5 billion-plus bushels of soybeans, the most since 2017, when soybean production peaked at 4.4 billion bushels. At current soybean demand projections indicated above, the increase in soybean production would push ending stocks up to 286 million bushels, 84% above current estimates of 155 million bushels. The stocks-to-use ratio would increase 3%, as well, from 3.5% to 6.5%. This stocks-to-use ratio is similar to the ratio in 2007, when prices were $10.15 per bushel.

Figure 2 displays soybean stocks-to-use ratios with prices from the latest WASDE comparing the scenarios of an increase or decrease to soybean planted acres. 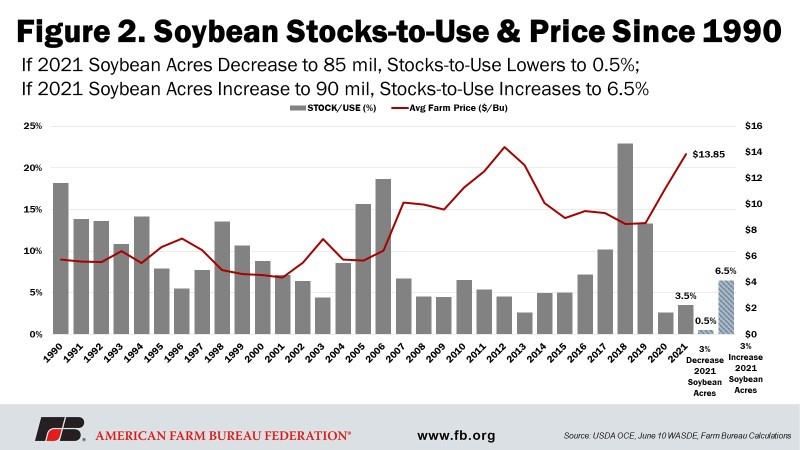 Farmers have been closely watching market trends since intended planted acres were first reported in the March Prospective Planting report. Corn and soybean futures prices have risen 23% and 16%, respectively, compared to USDA’s estimates for the 2020/21 marketing year. The incentive to plant either commodity is strong and more than likely we will see farmers increase acreage for both commodities. Given that USDA first estimated farmers would plant 182 million acres of corn and soybeans combined, clearly, there is room to grow. However, the largest limiting factor in commodity production is the weather. Diverging weather patterns with drought in the West and moving East and heavy rains in the South and along the Mississippi Delta region could cause a hiccup to the scenario of maximizing all corn and soybean acreage. Big news is to come on June 30, so we shall wait and see what farmers ended up doing. 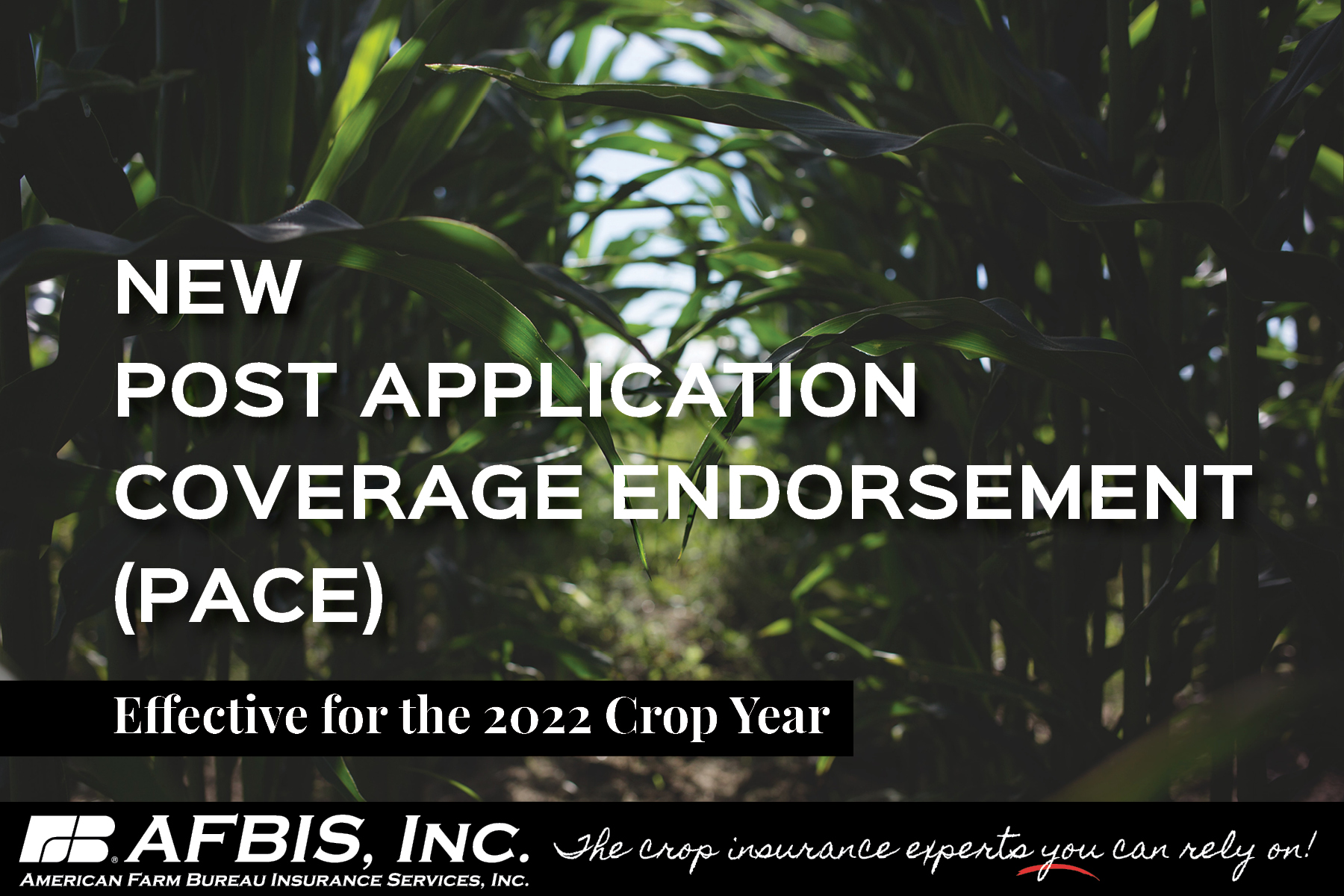 The 2022 spring crop insurance agent training season has officially begun! We started our journey in Lansing, MI this morning. Thank you to all our staff, agents, and adjusters for attending! https://t.co/CTVDYtucq6 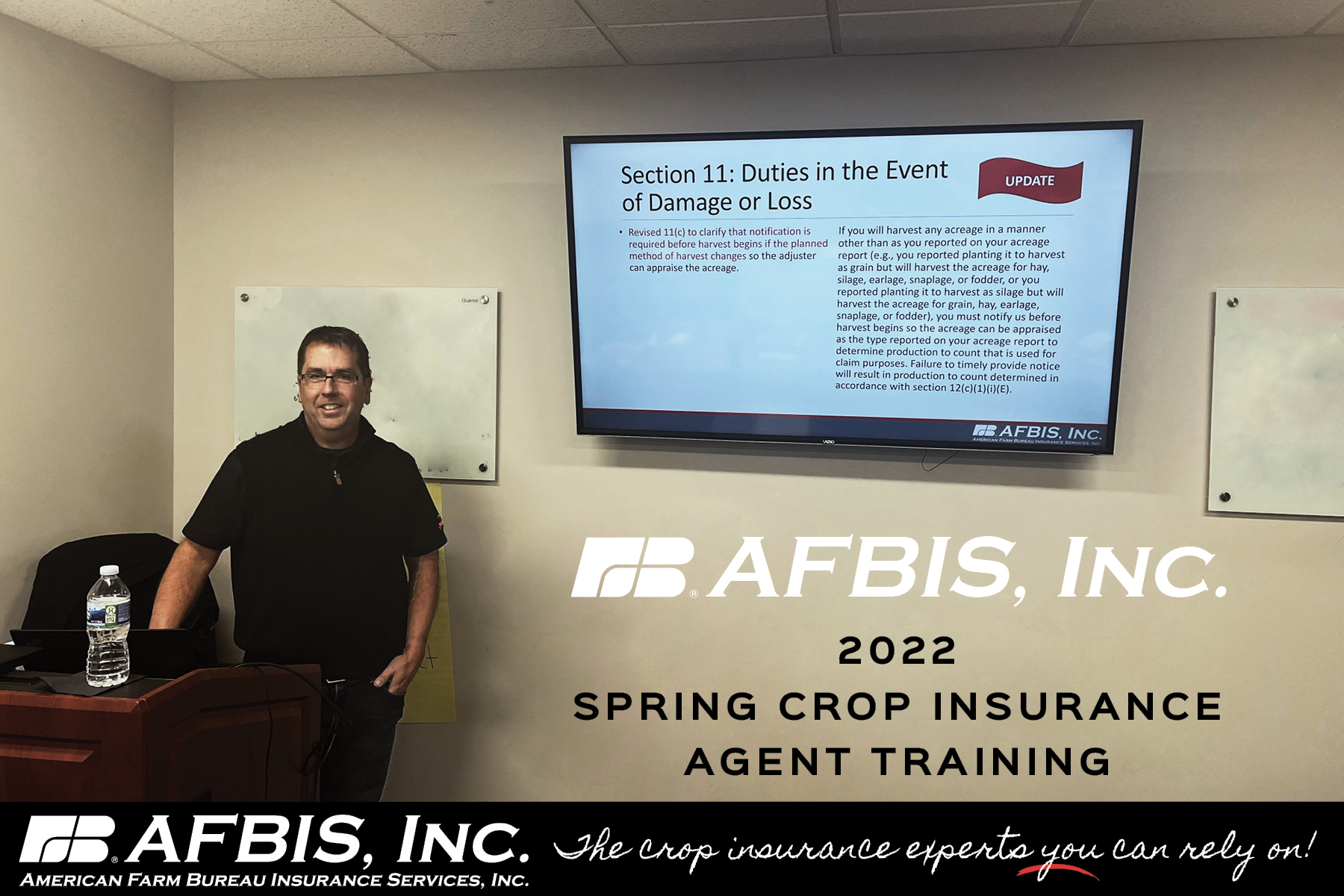 We are wishing you and your family a Happy New Year! https://t.co/SK2tthVpK3 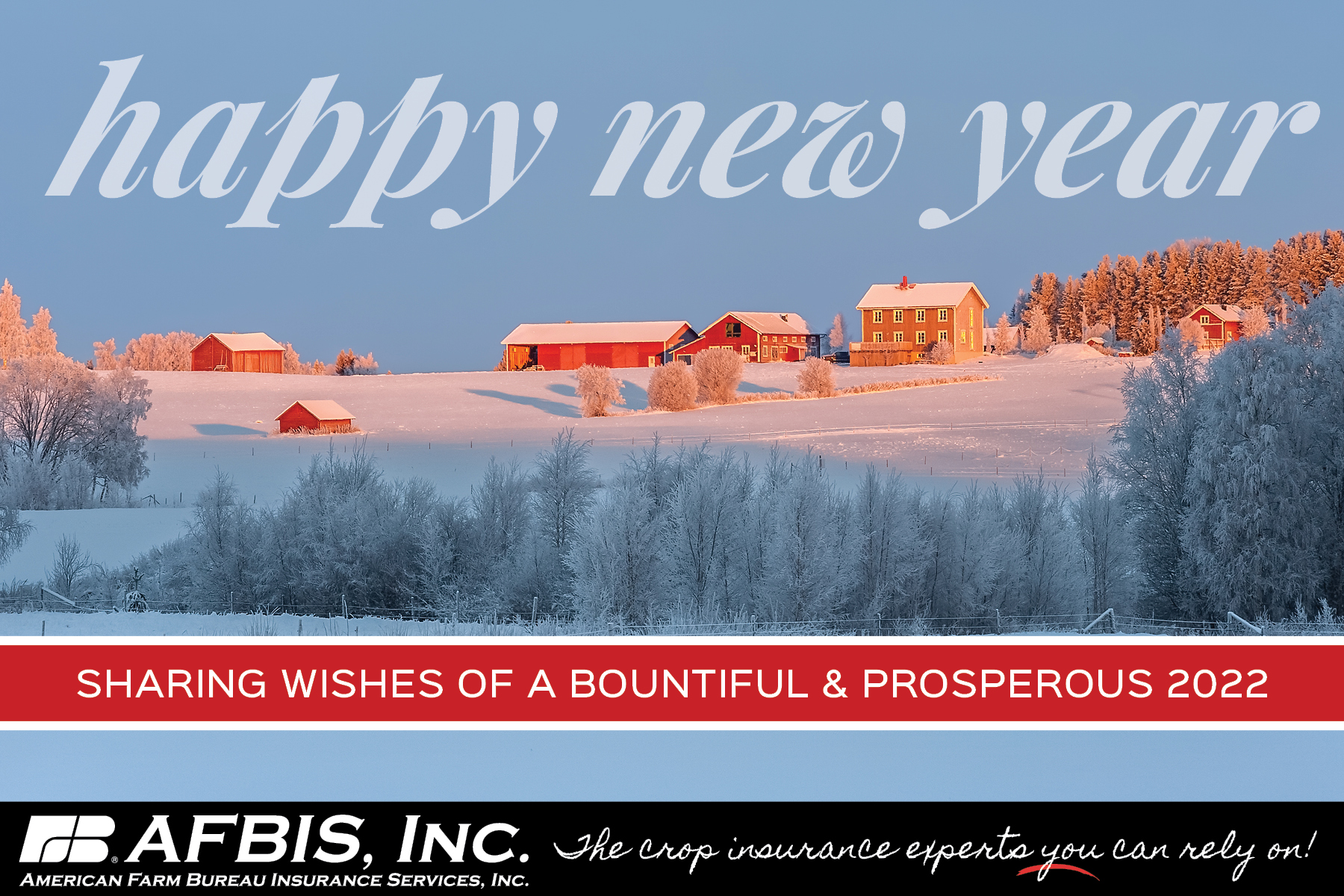 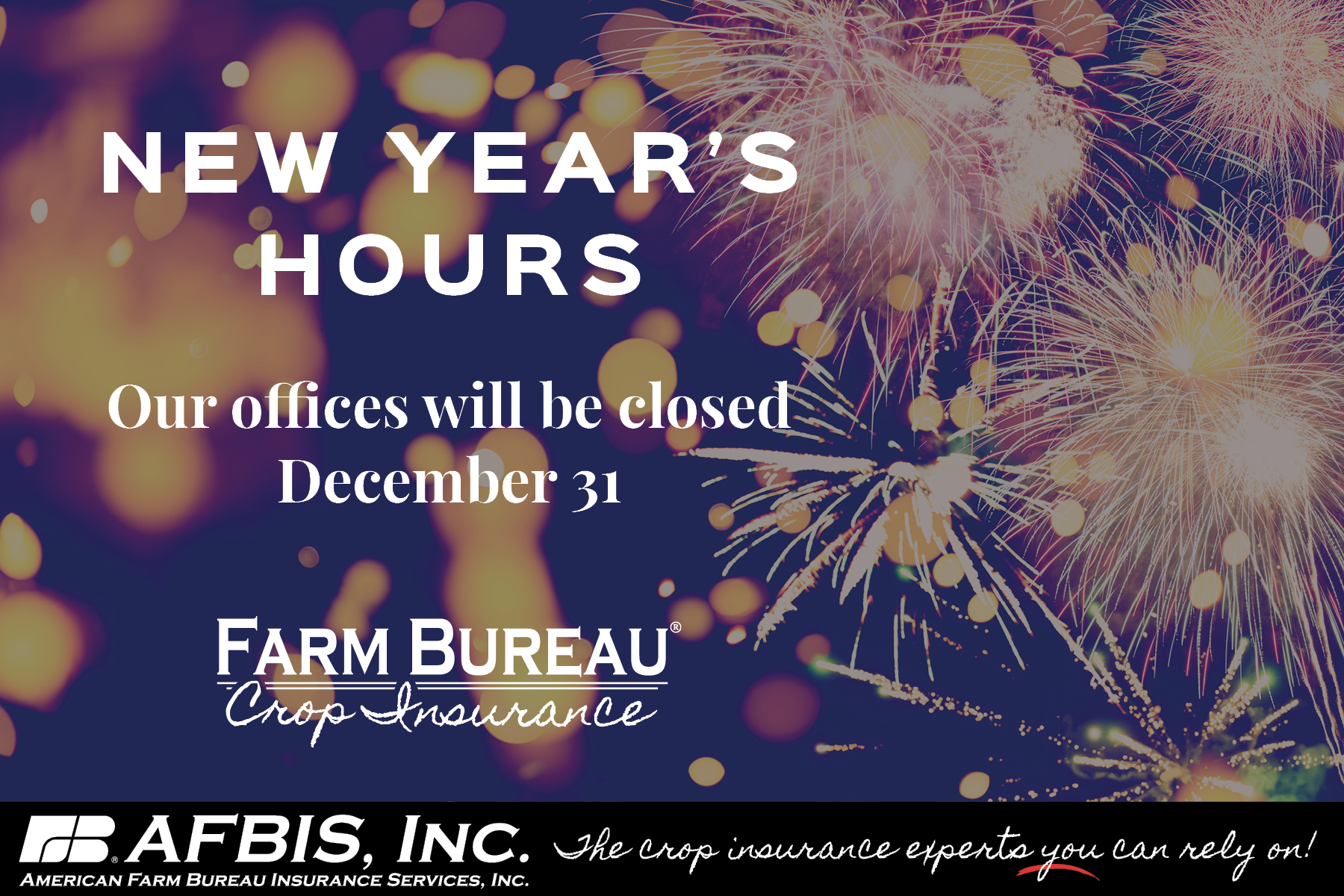 The AFBIS Regional offices will be closed on Friday, December 24th, and Monday, December 27th for the holiday! Regular business hours will resume on Tuesday, December 28th. https://t.co/TYmBSos5a9 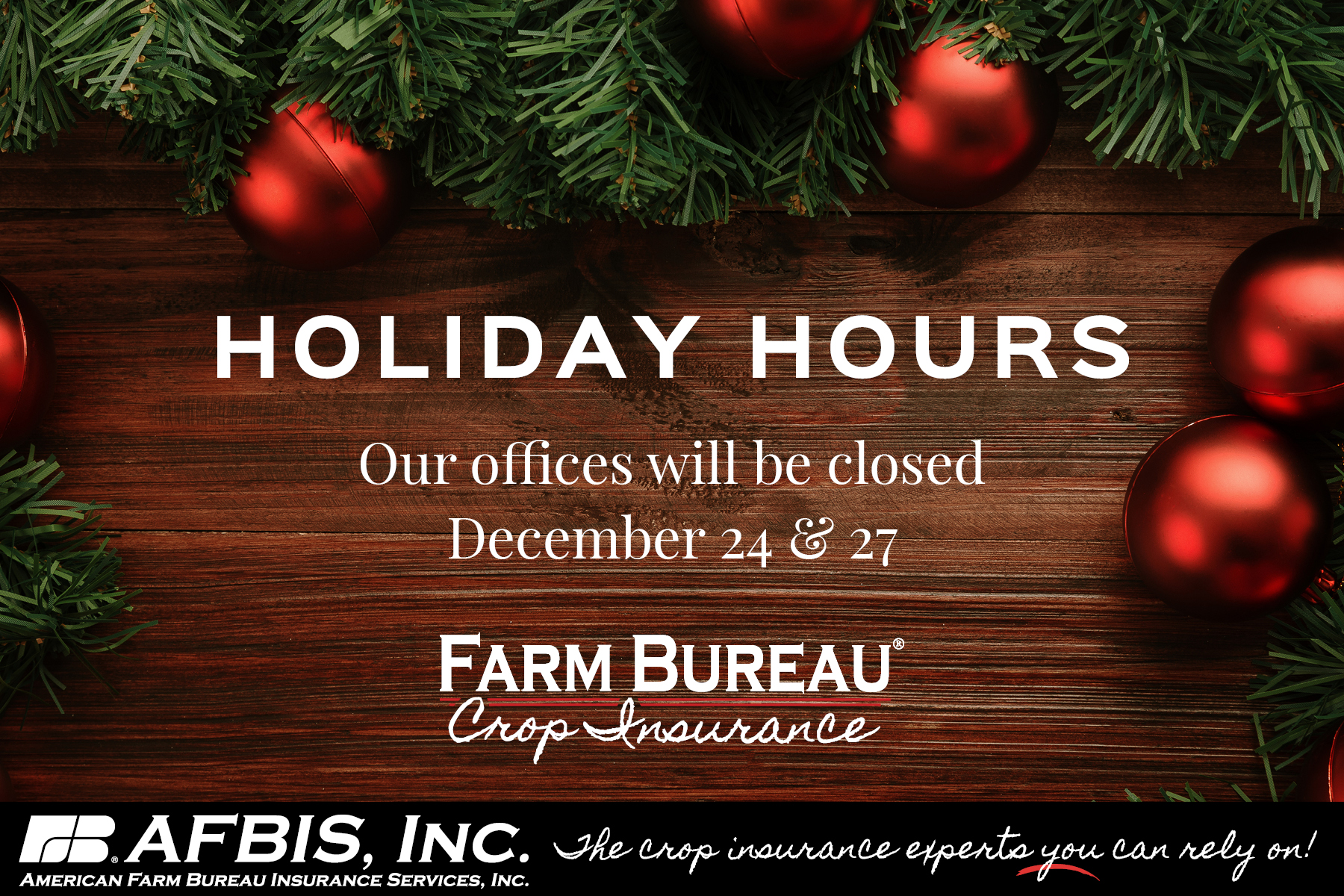